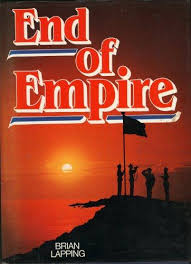 試閲
作者： Brian Lapping (著)
出版社： St Martins Pr
國際書號： 9780312250713
加入閱讀紀錄
Britain's empire may have been one of the most civilized in history, but it was still an empire ruling over native peoples without their consent. Lapping describes the British withdrawal from India, Palestine, Malaya, Iran, Egypt, Aden, Cyprus, Gold Coast, Kenya and Rhodesia with an emphasis on the native leaders and the British administrators, diplomats and politicians. Loaded with many photos and maps, this is a fascinating book.

Brian Lapping is a former journalist (started his career working as a journalist on The Guardian and The Financial Times) who moved into documentary making in the 1980s (for Granada TV - UK); he is also a historian.